In the eighteenth episode of What Donors Want, a podcast by I.G. Advisors, Rachel Stephenson Sheff travelled to New York to host a very special live recording at Segal Family Foundation’s Annual General Meeting (AGM). The podcast is now officially sponsored by the Segal Family Foundation – and to kick this off Rachel co-hosted a panel discussion with the Foundation’s Director of Partnerships, Cher-Wen DeWitt, featuring three of Segal’s brilliant grantees: Solomon King Benge, Ash Rogers and Peggy Walenda Mativo. This episode featured What Donors Want with a twist: instead of interviewing a donor, this time Rachel sense-checked the advice donors have given on the show with fundraisers themselves. 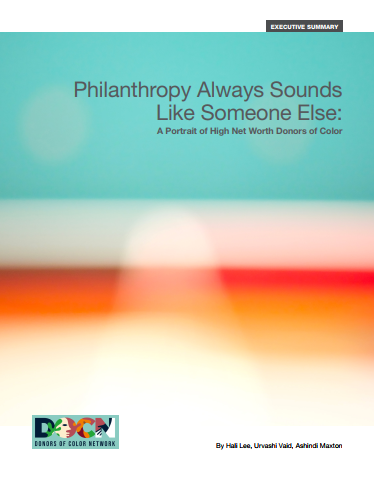 Philanthropy Always Sounds Like Someone Else: A Portrait of High Net Worth Donors of Color – Executive Summary